In 2002 Nick Kanavati and George Kaniamos from St. George Greek Orthodox Church went to Guatemala to play with orphans for one week. The stories of the orphans were very tragic; most had been sexually abused, beaten, disfigured and had seen their families and friends killed in war.

Poverty is rampant as a significant percent of the population is living in metal boxes with dirt floors. There are also many children that could be seen wondering around the streets who we were told had no homes.

The Hogar Rafael Ayau Orphanage is a sanctuary for poor, abandoned children run by a few nuns. Without the orphanage, the children may be taken by business persons who may sell them to outsiders without proper background research for profit. The risk of being sold into the sex industry is also a big threat for children who find no loving protection.

The nuns of the orphanage create a vibrant spiritual atmosphere where the wounds caused from previous experiences can be healed. Recently, an extremely beautiful cathedral was built which will always be a source of pride and inspiration for the children and people of Guatemala.

In the cities of Palestine the most holy events took place. God became flesh in Bethlehem. There He walked among the people, gave sight to the blind, healed the sick and raised the dead. He took disciples and gave them the Word for the salvation of all humanity. In Jerusalem He was crucified and rose from the dead, destroying death by His death.

The ground of Palestine is soaked with the blood of Christian martyrs who without violence but love for their enemies endured the most horrible deaths imaginable. In the 4th century, with the support of Constantine the Great and his mother Helena, the seeds of the saints and martyrs of Palestine flourished as churches were built and monasteries filled. Palestine was a center for all of Christianity.

Pascha at The Holy Sepulchre, during Ottoman Rule, where Jesus rose from the Dead.

Over the last two thousand years wars and politics have taken a heavy toll on the Christians of Palestine but perhaps the events of the last century should be noted as particularly devastating. At the beginning of the 20th century Christians made up about one fifth of the population of historic Palestine. Today, 80% of their historic homeland is gone and they are struggling to maintain a population of 2%. 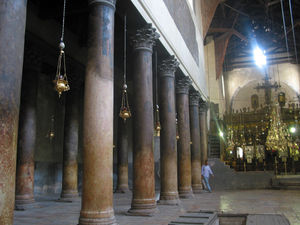 The Church of the Nativity - Bethlehem, Palestine.

The hardships forcing Palestinian Christians to leave are numerous. St. George Greek Orthodox Church in St. Paul, MN welcomes the efforts of Dr. Maria Khoury of Taybeh, Palestine. Maria is working hard to alleviate the suffering of the Christian community in Palestine so that they may stay and the Light of Christ may shine over the Holy Land. A list of some of her works are below: 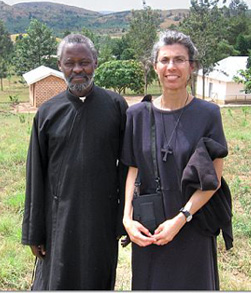 Farah Na Amani! Orthodox Tanzanians greet each other daily with this Swahili phrase which means ‘peace and joy’. I learned this quickly on my mission trip to the Diocese of Bukoba in Northwestern Tanzania in the summer of 2006.

I was inspired to go on this mission trip for several reasons, but the two primary draws were my wish to do something that truly made a difference, as it related to my Faith. (A previous trip to Russia, in 1995, and experiencing Orthodoxy there, was the straw that broke the camel’s back.) The second reason, my increasing awareness of Africa, Tanzania in particular, as a place truly drawn to Orthodoxy. I applied for and was accepted, as part of a seven person team through the Orthodox Christian Mission Center in Florida, to teach basic catechism to ‘new’ Tanzanian Orthodox Christians. We spent nearly four weeks teaching young adults, parish council members, catechists and choir members more than 30 topics of interest as requested by then Bishop Jeronymous. 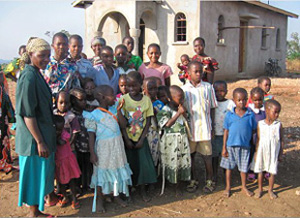 Tanzania is one of the poorest countries in the African continent. But one does not see this in the faces of the people that my team educated nor in the villages that we visited to learn about life in Africa. These people that we taught, learned from, dined with, sang with, cried with and danced with, are humble and feel like they have so much even though conditions are challenging by American standards. Electricity is sporadic, if it even exists, clean water is scarce, malnutrition abounds. Malaria is ubiquitous, as is dysentery and typhoid. The average monthly income is $50.00, most children do not have shoes, much less socks. Clothes are few, but clean. Children go to school up to age 10 for free and then either go to work as farmers or if they are lucky and manage to get scholarships, continue with school so they can get better paying jobs and provide for their families. The faith of these people is indescribable. They have so little, but showered us with gifts of fruit, They asked us for our blessings, hugged us and constantly thanked us for coming and loving them. 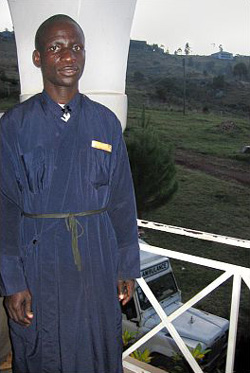 Orthodox Christians in Tanzania are aware that outside of Tanzania, across the ocean or even the other side of the equator, that life is much different-even without seeing it for themselves through pictures on television or articles in newspapers. But, as difficult as life is for them, with a life expectancy of 45, they have faith- believe that God truly loves them and will look after them. This became quite obvious by the complexity of the questions that were posed to us during our seminars, and the intensity with which many prayed, sang and participated in the services. While many of us were caught off guard, we were simultaneously inspired.

When I left, I was ready to stay. I know I will return because I want to return. I still talk about the four weeks of my life in Tanzania like it was yesterday. As with any activity one gets involved with, you get out of it what you put into it- I can guarantee an unforgettable experience by getting involved in mission work.

A few notes about the history of Orthodoxy in Tanzania. When Orthodoxy first arrived in Tanzania in the 1970’s and began to grow, the baby steps that were taken resulted in 55 Orthodox communities taking root once the Bukoba Diocese was established. OCMC Mission Teams have been serving in Tanzania since 1994. Mission teams have worked side by side with the Tanzanians teaching, building churches and a catechetical training center for monks and priests. As of 2006 it has expanded to 166. Seventy of these communities now have permanent churches. The number of faithful has increased from 17,000 to 41,200, and the number of clergy serving them has more than tripled from 9 to 34. In 2007, teaching and construction of churches took place at the request of now Metropolitan Jeronymous.

For more information about mission work visit www.ocmc.org. You can also learn more about my trip by clicking on the link to my powerpoint presentation made at St. George in the Fall of 2006.